Passive house 100 m2.
The phrase “passive house” has finally firmly entered the vocabulary of architects, builders, customers. Upon such a request in Ukraine, search engines produce, without exaggeration, thousands of results – both projects and implementations. But can all these houses have such a proud title? We’ll try to figure it out … Often, when trying to clarify with the manufacturer what his house is “passive” in response to, we hear a vague: “well, it consumes less heat …”. Yes, of course, low (up to 10% of the “classic house”) energy consumption (and not only “heat” in the winter, but also “cold” in the summer) is one of the essential signs of “passivity”, or at least “energy efficiency” .
But this is not only and not so much. The term “passive” means that low energy consumption in the operation of the building is achieved by passive means, that is, by the architecture itself, and, not, for example, by some high-tech technologies. In other words, it is easy to achieve low energy consumption by turning the roof into an expensive solar battery, an extension into a collector, by drilling a hundred-meter well of an underground heat pump, and installing a full-fledged “smart home” system. With these methods, a medieval castle can be made energy-efficient. But will such decisions be economically viable? In a passive – not by name, but by its essence – house, low energy consumption is achieved by a complex of design solutions. Of course, as in any other architecture, the form and function are equal – otherwise, an underground bunker with an entrance gate would turn out to be an ideal passive house. The art of the architect of the passive house lies in deeply thought-out functionalism, and, at the same time, restrained beauty. Everything in the layout is subject to energy conservation. It starts with a “building spot” – a passive house is necessarily “extended” along the west-east axis. The northern, cold wall is blank. Any window to the north significantly increases heat loss. South – on the contrary – is maximally glazed. Thanks to this, the low winter sun warms the house through and through, turning the floor, and even the opposite wall into a kind of heat accumulator. Naturally, the windows use exclusively energy-efficient double-glazed windows filled with inert gas and with glasses coated with an invisible deposition of silver oxides, “returning” up to 70% of the heat leaving the house. “But in summer such a house will turn into a giant greenhouse!” – the customer will exclaim – and will be wrong. The removal of the roof in the house is not accidental, but specially designed in such a way as to “cut off” the hot summer sun – because it is much higher above the horizon than in winter. Not a single ray in stuffy July will get inside, which means that there will be no place to overheat! In such a house it is always cool in the summer – and this is without the use of air conditioners, which means, again, the residents’ funds will go to something more useful than paying for electricity. A slightly “envelope” of the roof, cut through with a ribbon of windows, is also not accidental – through these windows the corridor, hall, and, most importantly, the rather “deep” zone of the kitchen-dining room are illuminated and insolated. And in the summer, through ajar windows, superheated air is constantly removed from the house, a comfortable temperature is maintained, actually allowing to do without air conditioning, and without forced ventilation.
You can still write a lot about the “one-story” of this house, thanks to which it is absolutely safe and as friendly as possible to children, elderly and inactive people – while “saving” the area and cost of stairs and halls. To write about how the author of the project managed to “invest” three full bedrooms and three bathrooms in the area of ​​a two-three-room apartment. About the super simple “delivery” of food to the kitchen through the “summer” doors … About the absence of barriers between you and nature, quiet summer evenings on the terrace and fun winter parties in the living room … But as they say – it’s better to live once than read three times. Open and bright, simple and beautiful, energy efficient and safe – your dream home is waiting. 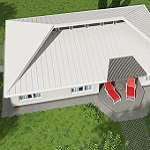 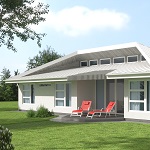 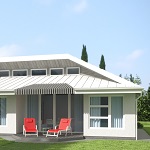 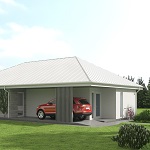 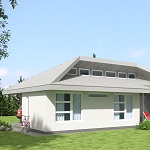 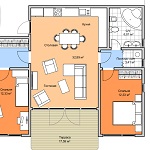 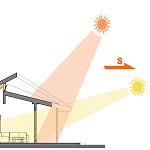